Just wanted to thank bigben_again and Morganna for all of their dedication, time and efforts with the local kitties.  Both PFA and St. Hubert's are "class acts".  I used to volunteer at PFA many years ago and also have a friend who currently volunteers at StH with the cats.  Our community is fortunate to have these resources.

Here's my little tabby, now about 12 weeks old.  He and his littermates went back to the rescue a few weeks ago for their surgery.  The siblings are gone but he remains. Sad, because of the three, he is the sweetest, cuddliest, most playful, gentlest kitten of the litter. While the rescue is ultimately responsible for finding him and home - and she will because he has a fantastic personality - I am letting y'all know if you're looking for a kitten who is a magnet to a comfy lap, this is your guy. He'll crawl right up, start purring and go to sleep. He is great with kids and respectful of other cats. Perfect litter manners. You'd love him. 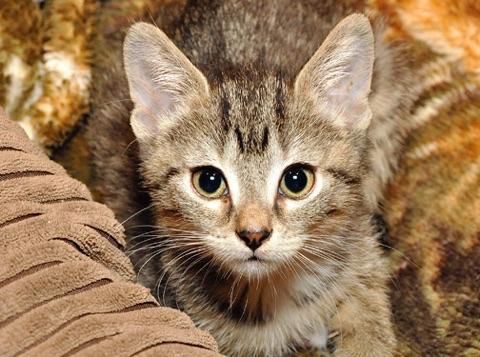 Here's my little tabby, now about 12 weeks old.  He and his littermates went back to the rescue a few weeks ago for their surgery.  The siblings are gone but he remains. Sad, because of the three, he is the sweetest, cuddliest, most playful, gentlest kitten of the litter. While the rescue is ultimately responsible for finding him and home - and she will because he has a fantastic personality - I am letting y'all know if you're looking for a kitten who is a magnet to a comfy lap, this is your guy. He'll crawl right up, start purring and go to sleep. He is great with kids and respectful of other cats. Perfect litter manners. You'd love him.

so cute... I would take him in a heartbeat if I were in the market for a new furry addition...

Here are two sisters I got from the rescue when I swapped once the last bunch of fosters went for their surgery. "Kitten season" often turns into "Ringworm season" and one of the sisters is currently afflicted.

"Ringworm" belies its name. It's not a worm, but a fungus that causes the fur to fall out, generally in a circle, hence the "ring" part of the name.  There are a several treatments for it but most folks just go to the drugstore and get cream used to treat athlete's foot. Some people treat prophylacticly by applying apple cider vinegar to the fur, which creates an inhospitable environment for the fungus to take up residence. Once it appears, you're in it for a few weeks until the cycle abates. Ringworm is highly transmittable to other cats, and people can contract it too (experience speaking here).  These kittens are lucky because they'll get to see a ringworm-free future. Sadly, most cats and kittens who contract ringworm in municipal shelters are simply killed. 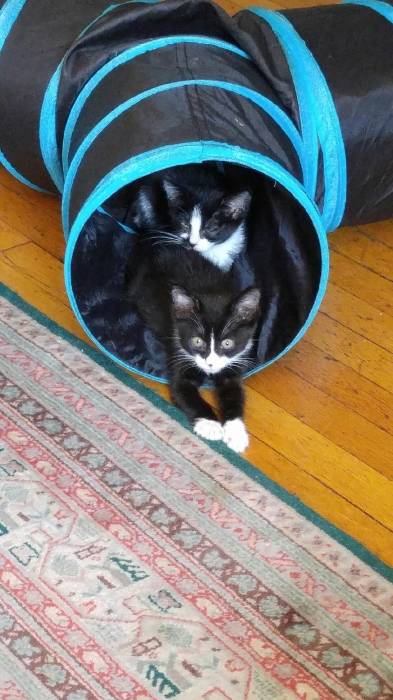 In addition to the two tux sisters (posted above) who've been with me for a couple of weeks, I agreed yesterday to foster this batch of five three-week-old kittens. A tabby, a dilute tortoiseshell, an orange, and two buffs.  The worst part of fostering (aside from kitten death, that is) is getting up every few hours to feed them but once they get to this age, once a night is usually enough.  The best part of fostering is you can actually pee in your pants and everyone will think that aroma is emanating from the kitten carrier (because it always is...). It's kind of like when you blame the dog after "Burrito night". 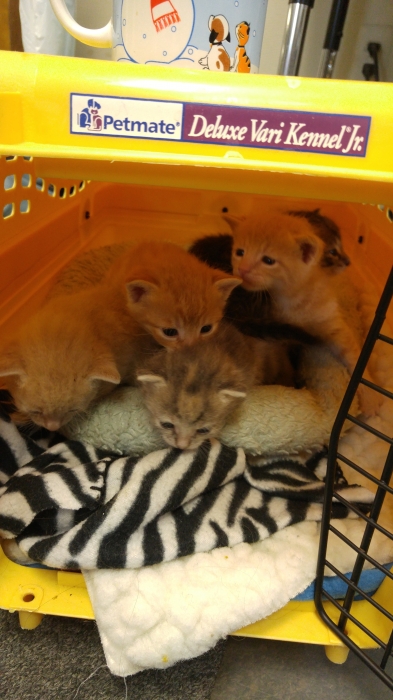 Thanks @bigben for the reminder about kitten season and it's a good segue into the topic of TNVR. Bob Roe may start a thread but I got an email that People for Animals will be having a TNVR meeting in Maplewood at the Community Center 120 Burnett on Sept. 9th.

@Morganna do you happen to know what time the PFA meeting will be?  Do you know if they need help with TNR? 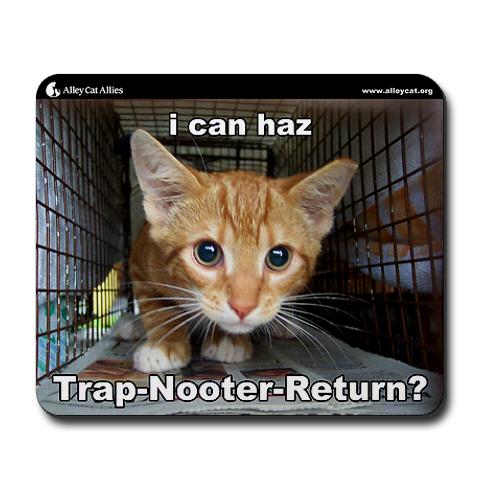 PFA could definitely use help. I'll check on the time. Thanks @cats!

If you personally, or you know of someone who takes care of bottle babies, I would like to share some products I recently found. The nipples that come with the bottle kits from the pet store are often unpalatable to some kittens, and then if you find one they like, you tend to use it until someone chews a hole in it, or even chews it right off and swallows it!  The product I just started using with this batch is called "The Miracle Nipple"; all these kittens like it and it seems to be indestructible. Also, kittens who are orphaned before 2 weeks are the most in-danger; at about 10 days, whatever good stuff they got from their mom in utero starts to fade.  A website called henryspets.com has the nipples and some supplements that are purported to give these fragile kittens the boost they need. I'm trying it with this batch.

I'd like to thank the people (and there have been several) from MOL who stepped up and offered to become foster families to other kittens in this rescue. Dozens of kittens have been saved thanks to you.  The generosity of your time and your talent is very much appreciated and I hope you are having fun. If anyone reading this thinks they and their family might want to enjoy having some kittens in their home for a month or so, please message me. 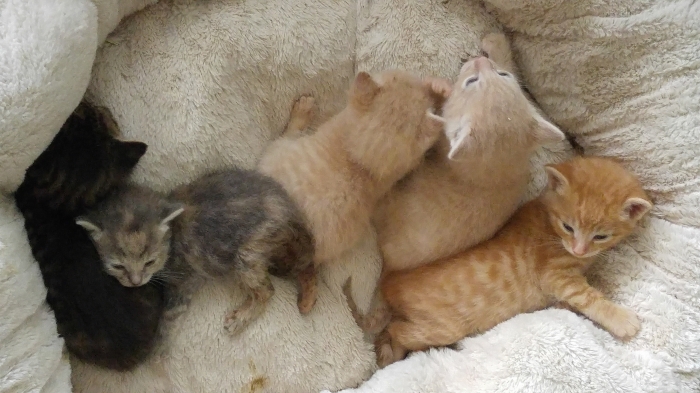 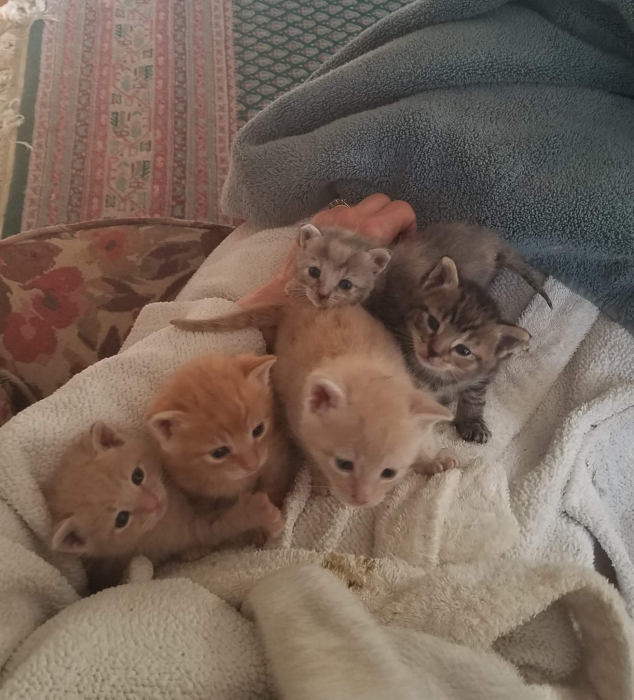 If only I didn't have two cats already... They are sooooo cute!

Although I haven't posted in a while, I haven't stopped fostering kittens and cats since this thread began. It's been a somewhat better year, with fewer deaths than 2016 but sadly, three of the kittens I posted in the picture above succumbed unexpectedly, two in one night. The volume of homeless cats and kittens remains daunting.

Last month, responding to the cry for help from Associated Humane, the high kill shelter in Newark who was filled to capacity, Morganna and I braved the facility and pulled out four adults and six kittens.  While we were there, officers brought in crates and crates of felines pulled out of a hoarding situation in Irvington, somewhere in the neighborhood of 30.  There is a lot of misinformation about hoarding; if it even crosses people's minds, they figure NJSPCA will step in, or in a pinch, rescues will cover.  The NJSPCA does not operate a shelter, so they have nowhere for the animals to go. The few rescues there are rely on fosters and truthfully, there just aren't enough people willing or able to help. So, five of the kittens came with me and the adults all went to my factory.  One of the adults was adopted, one is in foster, one is at my house, and one is still in my factory.  Two of the older kittens were adopted, one is at the rescue to be neutered today, one is in foster, two are at my house but those are going to another foster home tonight. So my responsibility to that batch is dwindling.

But then...last week, I got a call from PFA asking if I could take some bottle babies. Turns out, one of their TNVR partners who has a recycling plant in Jersey City had a shipment of recycling come in on a truck from Maine.  As the workers were putting a bin on the conveyor, they heard screaming. Inside the bin, were three tiny kittens, about 10 days old. Because the mission of PFA's partner group is TNVR, they have no fosters and are not equipped to care for tiny kittens.  They're with me now....

As If that wasn't enough, Morganna saw a FB post from the Elizabeth shelter urgently looking for someone to step up and help with a carrier full of  cats and kittens of mixed ages- about a dozen - someone had left outside a shop in Elizabeth.  She and I took another drive and this time, in a bid to resist temptation, I sat in the car while she went in for two kittens.  After she walked out with four and got in the car, I noticed she was a little quiet. There are many ways to describe her, but "person of few words" is not one of them. I pressed her on it and she said the shelter had put all the kittens from that case all together in the cage with the nursing mom. Nine kittens. Morganna had taken one of those, leaving eight. Eight kittens meant a few lose out in the chow line and we knew that wasn't going to work.  I told her to go in and grab two or three for me. She went back inside and got me three 3-week-olds that need the bottle. We left five with the nursing mom. Fortunately, Morganna was able to find a short-term foster for a few of the seven we took.

And then Tuesday night I got a call from a rescue asking if I would take a litter that were reported to be "about a week old."  I agreed and they were delivered to me yesterday afternoon. If by a week, you mean three days old, then yeah, they're about a week old. Placentas still attached. The heaviest weighed in at 3-3/4 ounces. These are always touch and go and require feeding every few hours, around the clock. I don't expect to get much quality sleep for a few weeks.

i realize most people can't tote a couple of carriers full of bottle-feeding kittens to and from work every day like I do, but if you ever get the urge to help out with some low maintenance adults or have fun with some eight to twelve week old kittens, please message me.

The small grey and white kitten shown in the picture is one of the kittens who traveled from Maine. The other picture is the same small kitten sitting next to the scrum of three 3-day-old kittens, just to show you how scary tiny they are. 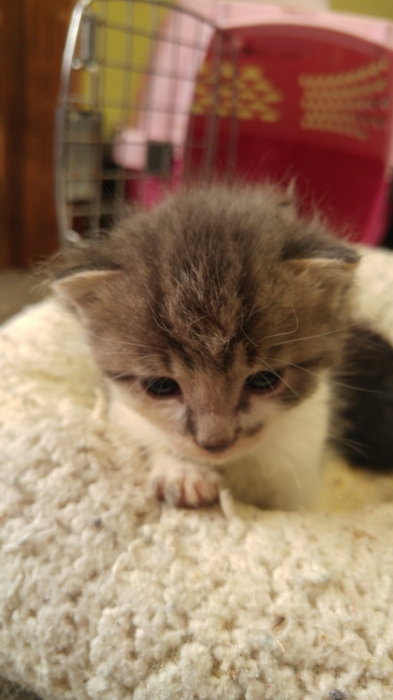 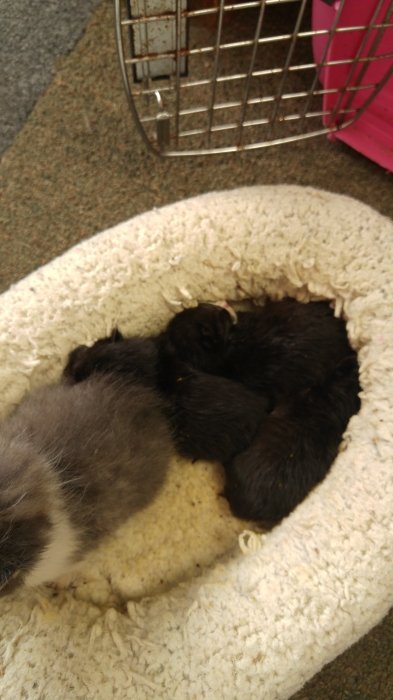 Oh my goodness! I don't know how you and Morganna do it. It would break my heart every day. I bottle fed a kitten once, so I know how tough it is. You are both amazing.

Actually marylago, instead of heartbreak, when they're this small, when you go check on them and they're still alive and hungry, it's a victory every day.  And when they get adopted, that's cause for celebration.

Oh my goodness! I don't know how you and Morganna do it. It would break my heart every day. I bottle fed a kitten once, so I know how tough it is. You are both amazing.

bigben does more bottle feeding then I do. Actually more than anyone in the Western Hemisphere. That said, I hate it! There I said it! I actually hate it! I'm a nervous wreck if they are not drinking enough or if they are not active enough. I stare at them to see if they are breathing!

But once they start walking and eating and being goofy, I fall in love. I become each one's personal agent. I rave about their personalities, extol their cleverness and gush over their beauty.

Each time I argue that this one is the most adorable, or charming or hilarious, and insist that this time, this one is absolutely special.

And of course each time I am proven right, when that one adopter comes along and sees exactly what I see and then I know it's time to say good bye.

So marylago, time to give it another try?

Tyson was such a cute kitten... 14 years later, he's our feline overlord! 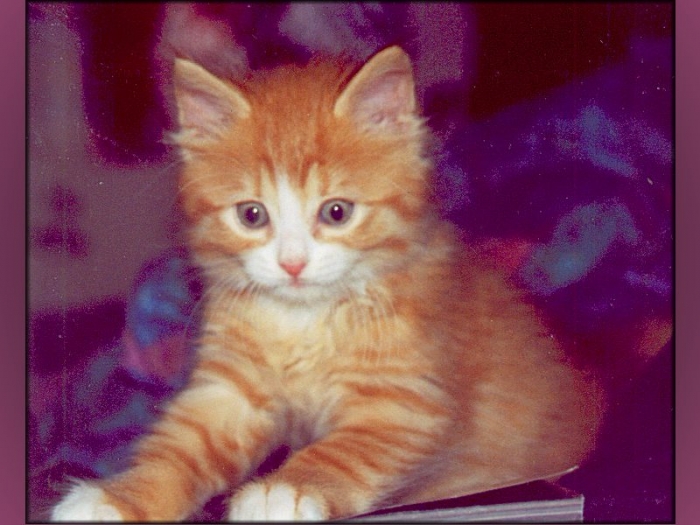 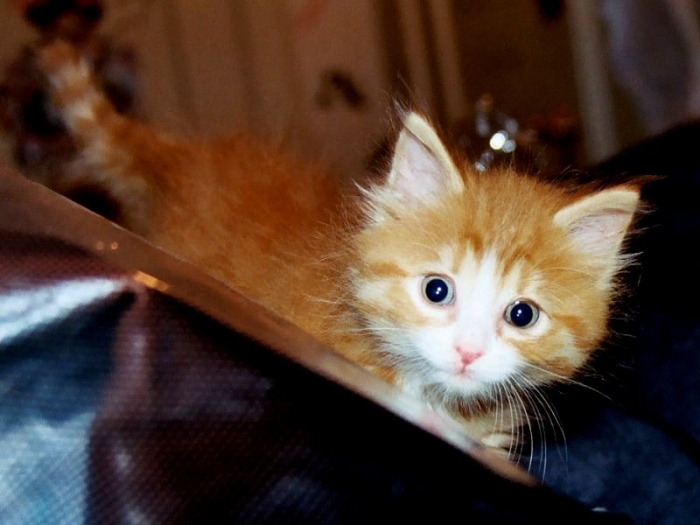 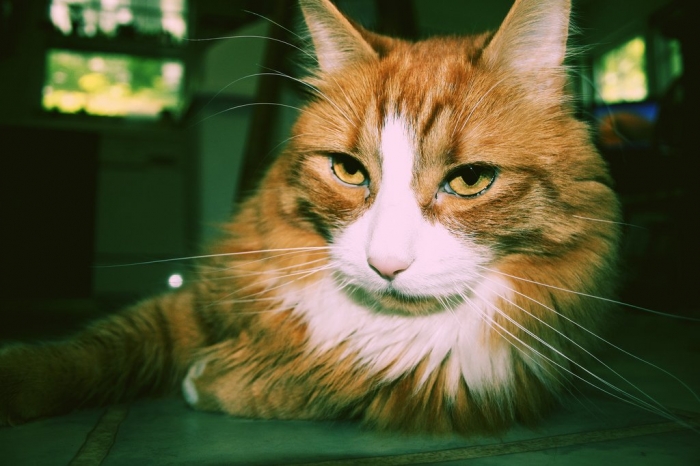 That cute kitten is a magnificent cat. And his coloring!