MAPLEWOOD, NJ – March 2020 – American women won the right to vote only 100 years ago – and only after a struggle lasting more than 70 years. On Sunday, March 15, from 1pm to 4pm, visit Durand-Hedden’s new exhibit Honoring the Hard-Won Fight for Votes for Women to learn about the origins of women’s suffrage and modern feminism -- an outgrowth of women’s critical involvement in the anti-slavery movement before the Civil War. Both white and African American abolitionists saw the need to expand the push for freedom for black people with a movement to enable all women to exercise their rights as citizens.

Some of the most prominent women’s suffrage activists lived in New Jersey, including one of the founders of the movement, Elizabeth Cady Stanton, Lucy Stone, Florence Spearing Randolph, and Alice Stokes Paul. Stone cited the original American protest against England of “taxation without representation” in refusing to pay her taxes; Randolph, who served on the executive board of the New Jersey Woman Suffrage Association, organized the New Jersey Federation of Colored Women's Clubs, and became the first African American woman to enroll at Drew University. Paul was a vocal leader of the 20th century suffrage movement, advocating for and helping to secure passage of the 19th Amendment to the U.S. Constitution. At 2pm, hear Paul vividly share how the right to vote for women was finally achieved, as interpreted by Alisa Dupuy of The Ladies of History.

Durand-Hedden House is dedicated to telling the history of the development of Maplewood and the surrounding area in new and engaging ways. It is located in Grasmere Park at 523 Ridgewood Road in Maplewood. For more information or to arrange group tours call 973-763-7712. You can also visit our website at durandhedden.org and find us on Facebook and Twitter. 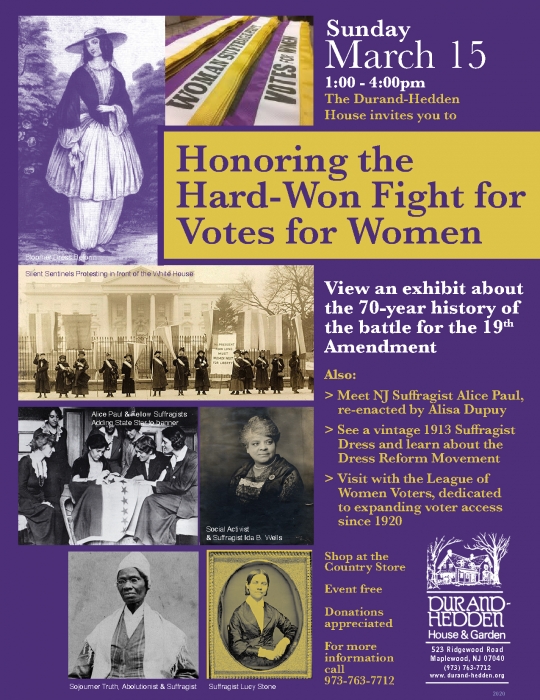