Since we're going to probably hear more from the Pillow Guy soon - here's a pretty good rebuttal to some of his key claims:

He launched his platform - Frank:

hmm, I thought this was it at first: https://getfrank.com/

They must be getting a lot of traffic.

Looks like just a live video feed at the moment.

He can't even get his lighting right.  Looks like he got the biggest name in the GOP entertainment field - Mr. Ted Nugent. 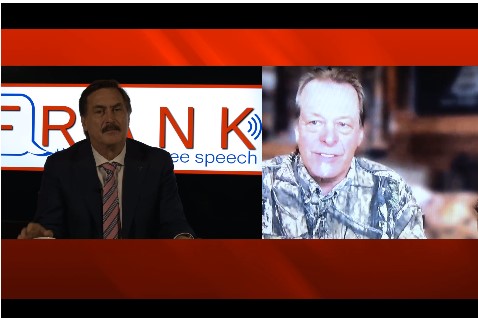 So the main rant is that democrats will attack the Bible next.  He encouraged people to watch Braveheart.  China and communism came into our country and stole the election.

You aren't able to sign up today because their platform is under attack.

They have a counter and there almost 15 million watching.

My Pillow has sued dominion for 1.6 billion.

OMG - Mike Flynn is on now.

Nugent says he's not in the R&R HOF because all of the "dopers".

They're going 48 hours straight!  FREEDOM!  (They did recommend that everyone should watch Braveheart.)

Bannon up next.  I think Trump is going to love this.

But it's comedy gold.

Mike Lindell was just duped into thinking Trump was calling into the program. pic.twitter.com/VUMy1etNA3

yeah - I tuned out - checked back in - they're really pushing the anti-vaccine angle.  We're all guinea pigs to a vaccine that the FDA hasn't fully approved yet.

Steven Miller must be on at some point today.  This rhetoric will certainly encourage more January 6th type actions.

But it's comedy gold.

LOL, they're attacking into our phones!  It is comedy gold.  They're unhinged.  Buttigieg should call in.

This will be out soon - once it is - I'm sure Trump will regain the presidency in a couple of months   :

Youtube removed it - good thing he has his own network.

Mike is about to launch his doc - claims it will be the greatest uniting moment of our country!

Listening to it in the background - Mike Flynn is pinning most of the voting fraud on China.

There's only claims that the totals are off - but no proof who got the "phantom" votes.

So a good amount of the doc was with Dr. Frank.  I'm not sure if Frank is his first or last name.

Now there someone on who's voice sounds disguised to remain anonymous.

ok these 2 guys are a big part of the show now - here a little I found about them:

And of course they must be legit - you can find them on American Greatness:

Their top cyber witness is also under disguise - and will stay this way until they get to the supreme court.

I love that Frank was started to fight against 1st amendment restrictions - then they can't even identify their experts. lol

I've been enjoying the Kimmel/Lindell back and forth - starts at around the 1:45 mark in this clip:

I think if anyone sleeps on one of his pillows, they will end up hearing voices in their heads. The foam in those pillows are no “memory foam”.

If anyone has tuned in and was wondering who the main guy is on there besides Mike - it's Brannon Howse.

Here's he is singing Christian ballads for 30 minutes - then rolls into the "Rise of Marxists and Muslims" lecture.  This guy is pretty scary.

And here's the Kimmel appearance:

Neither are welcome at classy hotels.

It's "MyPillowPalooza", with a guest list that rivals the bar scene in Star Wars.

Daughter by his first wife. I don't think their divorce was amicable.

That Time Dinesh D’Souza’s Ex-Wife Hoped Judge Would Throw the Book at Him | Law & Crime (lawandcrime.com)

we are living in such a weird time

I usually stay away from political comments since I am not nearly as astute at this as many of you.  But:

I recently did a Vulcan mind-meld, like Mr. Spock, of Trump supporters and found the following:

1.  Trump and his supporters are like TV wrestling fans.   This accounts for the tough in-your-face talk that Trump loves to do and his fans love.  You see this kind of talk from the wrestlers every week on TV and it is hilarious.

2.  The plot of many matches is that the "good" guy is beating his "bad" guy opponent.   But when the ref is not looking, the bad guy cheats and causes a nearly fatal injury to the good guy.  Remember the 1960s when Haystacks Calhoun had a horseshoe in the rear pocket of his overalls.

3.  The next part of the plot is that the good guy wrestler has a remarkable recovery and beats the bad guy wrestler.   Hulk Hogan was great at this and especially when he would rip his shirt off.

So, this is my current mind-meld info.  Trump and his supporters can not tell that TV wrestling is really just entertainment and not reality.