Mark Kelly to run for Senate!

One of WO's "Astronaut Twins"!

I didn't know he was from WO. And he's married to Gabby Giffords.

yay this could be +1 for the senate Dems in 2020.   He would neutralize McSally’s main talking point.

He and she (mostly him speaking on her behalf) spoke at my son's college graduation.  Very appealing, solid guy.

It's a good time for him to run, since he'll be on the ballot with the Democrat running for president. The state elected a Democrat (Krysten Sinema) already so the state party might be motivated enough to flip Arizona blue on both the presidential and Senate tickets.

I wasn't crazy about Gifford's endorsement of a couple of Republicans in the midterms but Kelly is his own man and some of it may come down to "the right candidate for the right district".

I know John Glenn did the same thing but can someone please explain. I understand that Kelly is really good at being an astronaut but what in the world (or floating above it) makes him qualified to jump to being a Senator in the field of governance?

This is a different question than "Could he get elected?"

steel said:
Someone please explain. I understand that he is really good at being an astronaut but what in the world (or floating above it) makes him qualified to jump to being a Senator in the field of governance?
This is a different question than "Could he get elected?"

He's a retired Naval Captain, a combat veteran, the husband of a prominent Congresswoman, with years of experience working at a major government agency.  I think that makes him as qualified as other candidates who have gone on to successful careers in government (John Glenn, Hilary Clinton, etc.).

Klinker, I suppose that you are correct. I guess I'm just perhaps having a bit of a reaction (over reaction?) to yet another person having name recognition and a bit of a hero image suddenly leaping to the complex world of being a Senator.

Also, as it happens, my late Uncle John was a Naval Captain, pilot, two-war combat veteran, and liaison with Lockheed for purchasing (a bit of a big-shot). He was also, (with all due respect for the departed) the LAST person I would have wanted as a Senator.

He has been campaigning for years now with his wife, Gabby Giffords, on gun control. Also being the spouse of a politician means that you have the needed connections and access and know a lot of the stories.  Not all military people should become politicians. However, it shouldn't disqualify them either.

steel said:
I know John Glenn did the same thing but can someone please explain. I understand that Kelly is really good at being an astronaut but what in the world (or floating above it) makes him qualified to jump to being a Senator in the field of governance?
This is a different question than "Could he get elected?"

The same question could be asked about almost any candidate at any level running for the first time.  You vote for a person that you think can do his homework,  and come to a reasonable decision and fight for what you think is right.  There are people in congress who have been there for years and still can't grasp some of the basic concepts of how to gather facts or vote other than how their party leaders tell them.  And while you might want to know your candidate will vote with the party on certain issues, you absolutely want them to be able to understand how they come to decisions.

Based on his history, his knowledge of congress (via his wife),  and his background, I would be able to support him.

Recently it seems that the only qualification that some candidates have had is money (Murphy, Corzine, Trump, etc).  The argument has been that if rich enough they can't be bought (certainly not true with Trump) and they must be smart if they made so much money (and certainly not true for many wealthy people).

Quite frankly, I was disappointed that Murphy was able to buy his position (assisted by the low popularity of Christie) - but we did not even have a real primary process to pick who the democratic party wanted.  Murphy might turn out to be a great Governor but certainly Mark Kelly is more qualified than Murphy was to run (or Trump, etc).

For a legislative position, I'm more willing to consider a less experienced candidate than for an executive position like a governor. The way Congress is structured, there's room to grow in the job as most of the "power" and decision-making on what comes to the floor comes from the leadership and the committee chairpeople. A freshman, particularly in the House, rarely is introducing important legislation, s/he is reacting to what others are proposing. By contrast, a governor really needs to know how to run a large organization, big budgets and a lot of people from day one.

I imagine Trump has changed the game in terms of relatively inexperienced people deciding to run for office. On one hand, they're motivated by wanting to fight to get him out and to turn around his policies. Also, they probably figure, if he can get elected, why can't I?

Bloomberg was one example of a person who was able to successfully translate his business experience into a successful political career and most felt he did a good job.

As I've thought about it since my earlier post I think I may be upset that more and more there collectively seems to be just an amazingly low bar for some folks to jump into some of the most responsible and highest offices in public service. In particular, our current so-called President.

Meanwhile, I suppose Gabby Giffords is now going to be piloting the space shuttle because she's married to an astronaut and he's told her stories about it.

PS: Public records show that Kelly voted n the 2012 Republican primary but I suppose that since then he has "evolved".

Even if one was a republican, I think it is the republican party that has moved so far to the right,  that many republicans now consider themselves a democrat.  however, historically I think Kelly has been in line with the democratic party for a very long time.  if I lived in a mostly republican state, I would register as a republican just so I could have a say in the primary which republican will be representing the state I lived in.

Our government was never designed to have career politicians -- that is what it has become.  We should be happy when people want to get more involved in our government.

We have some elected officials that have been in office for decades and many of them do not see qualified or even worse -- they just vote the party line knowing that as long as they stay under the radar they can keep their seat and collect their salary and eventually a large pension.

What do all three have in common? They held no public office prior to their election to the US Senate.

Mike everything you say it true and forgive me but it also sounds a bit like a list of allowances for someone who has yet to even make a policy speech to my knowledge.

As we all know, there are only 100 US Senators. I think there may be more people in my wife's spin class yet so many folks seem way too eager way too early to shove this guy forward.

I'm picturing him in a James Thurber cartoon sitting in an armchair saying to his wife, "Well what am I gonna do now that I'm back from outer space? How about Senator?"

Also, speaking as an old white guy, -do we really need yet another old white guy in the Senate in this day and age? -I'm not saying it automatically disqualifies him but I find such continuity less than electrifying.

Just pointing out where things are right now. The three people I found are not on my Christmas card list by any means!

I got that info from the Wikipedia article which lists the current Senators and shows what prior office(s) they held. Most had been in either the US House or state legislature. A fair number of governors and large city mayors.

It makes for interesting optics having a man running against a woman for a very visible elective office, when the Democrat is the man. You have competing progressive ideas ... more women in office vs having progressives in office!

Al Franken and Elizabeth Warren had not held political office prior to being elected to the US Senate and both were good Senators. 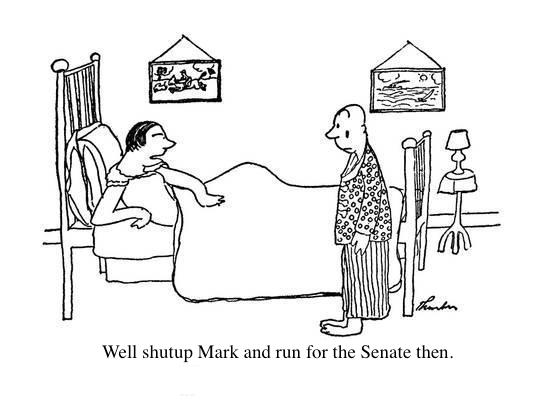 mikescott said:
Al Franken and Elizabeth Warren had not held political office prior to being elected to the US Senate and both were good Senators.

Good point. I missed Elizabeth Warren, although she held a couple of government jobs.

How many Senators have elementary schools named after them BEFORE running for office?

Was never a Senator, not to be too nitpicky. I could argue that being Supreme Commander of NATO and Chief of Staff of the Army earn him public office cred.

Ahhh.... missed the Senate bit.  If we were just talking about high office we could also add Presidents Taylor and Grant. Of course, they never traveled to space.....

Klinker said:
Ahhh.... missed the Senate bit.  If we were just talking about high office we could also add Presidents Taylor and Grant. Of course, they never traveled to space.....

That we know about...

Hilary Clinton is an interesting case. She is an attorney and was quite involved in her husband's administration (to the delight of comedians everywhere). She knew the Washington scene and had developed lots of contacts and relationships. So she wasn't a totally green candidate by any means.

Apparently this topic has devolved into a history trivia test. So many examples here of, "Yeah but whatabout?"

Yet precious little (almost nothing) about Mark Kelly's qualifications, positions, favorite color, -anything. That's because nobody knows yet.

I hope we are not seriously comparing this man to Dwight Eisenhower simply because neither has held public office before. Eisenhower saved Europe. Kelly has been floating in space for over a year and can be seen on YouTube adding color to floating droplets of water in zero gravity.

Don't get me wrong, If I lived in Arizona I confess that I would vote for a pack of gum over any Republican at this point but is there yet on the horizon a better Democratic candidate?