Authorizing the Secretary of War to Prescribe Military Areas

Now, therefore, by virtue of the authority vested in me as President of the United States, and Commander in Chief of the Army and Navy, I hereby authorize and direct the Secretary of War, and the Military Commanders whom he may from time to time designate, whenever he or any designated Commander deems such action necessary or desirable, to prescribe military areas in such places and of such extent as he or the appropriate Military Commander may determine, from which any or all persons may be excluded, and with respect to which, the right of any person to enter, remain in, or leave shall be subject to whatever restrictions the Secretary of War or the appropriate Military Commander may impose in his discretion. The Secretary of War is hereby authorized to provide for residents of any such area who are excluded therefrom, such transportation, food, shelter, and other accommodations as may be necessary, in the judgment of the Secretary of War or the said Military Commander, and until other arrangements are made, to accomplish the purpose of this order. The designation of military areas in any region or locality shall supersede designations of prohibited and restricted areas by the Attorney General under the Proclamations of December 7 and 8, 1941, and shall supersede the responsibility and authority of the Attorney General under the said Proclamations in respect of such prohibited and restricted areas.

I hereby further authorize and direct the Secretary of War and the said Military Commanders to take such other steps as he or the appropriate Military Commander may deem advisable to enforce compliance with the restrictions applicable to each Military area here in above authorized to be designated, including the use of Federal troops and other Federal Agencies, with authority to accept assistance of state and local agencies.

I hereby further authorize and direct all Executive Departments, independent establishments and other Federal Agencies, to assist the Secretary of War or the said Military Commanders in carrying out this Executive Order, including the furnishing of medical aid, hospitalization, food, clothing, transportation, use of land, shelter, and other supplies, equipment, utilities, facilities, and services. 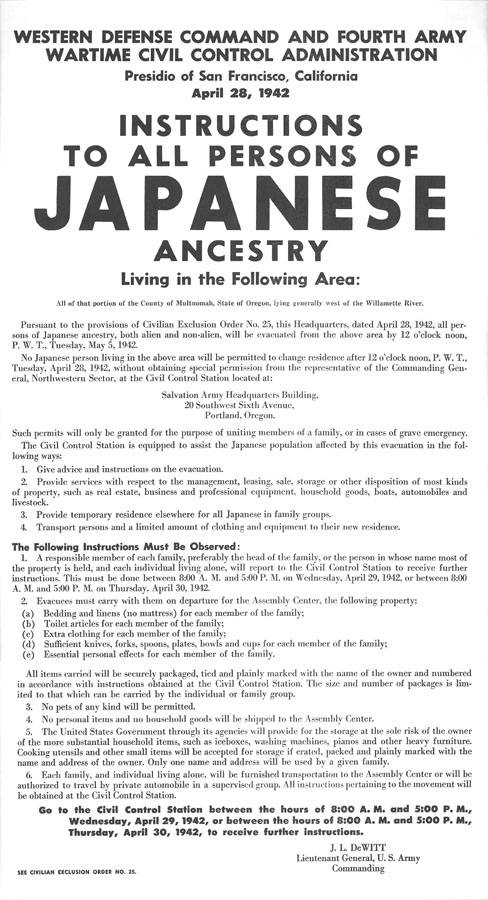 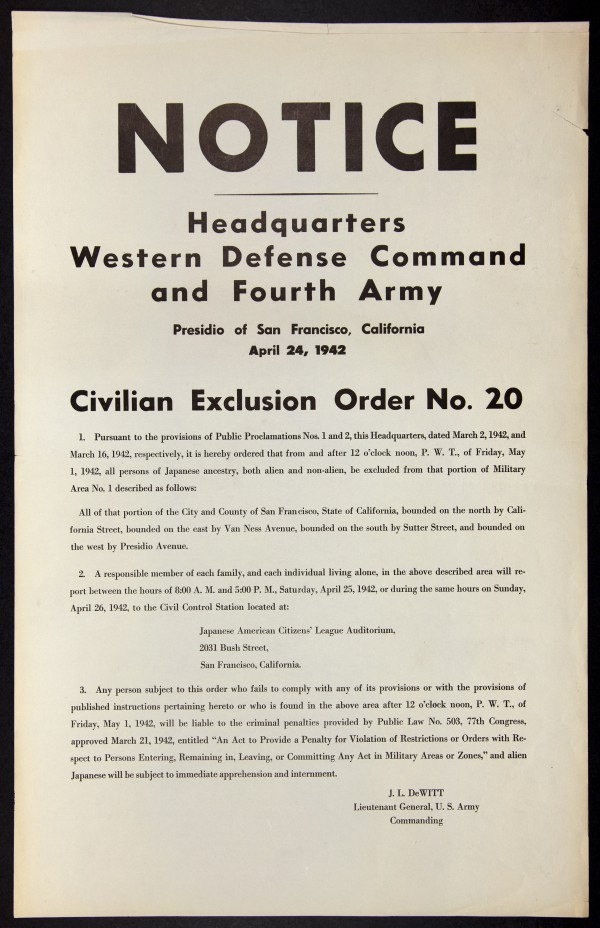 That was "a day that shall live in infamy".

I was just listening tonight to an episode of A History of Rock Music in 500 Songs, number 24. It is about the 1954 hit "Ko Ko Mo" by Gene and Eunice. No, not that one. There is so much historical detail in these things and I'm loving this early stage of it because it focuses on how many elements of rock grew out of jazz and blues.

Anyway, there is a passage in it that mentions how this policy caused a big change in the music business on the west coast. Prior to WWII, black people were not allowed to own businesses in Holloywood.

"But Central Ave only became a centre for black business because of one of the worst acts of racism in America's history. Most of the businesses there were owned by Japanese people. When, during WWII, Japanese people in America, and Japanese-Americans, were interred in concentration camps for the duration of the war, those businesses became vacant, and the white owners of the properties were desperate for someone to rent them so they "allowed" black people to rent them. There was a big campaign in the black local press at the time to encourage black entrepreneurs to take over these vacant properties, and part of the campaign was to tell people that if they didn't start businesses there then Jews would instead.

Sadly society in the US last that time was just *that* fractally racist."