A picture is worth a thousand words

I had wondered about this, but just for a moment, when I heard what had happened last month. I certainly didn’t realize just how close they are to each other. Didn’t someone here start a discussion a few years ago to try to rally support to stop it? They got steamrolled by those wanting to let the children play. Unlikely this will go to trial.

Jim: Sorry. I had forgotten about this. You asked why I posted this.

When I first heard about the Seton Hall Prep deforestation plan several years ago, my only concern was loss of wildlife habitat. I didn’t know about the site’s proximity to the hill. Even had I known, I’m not sure I would have recognized the other potential dangers.

When I posted this, I suspected South Orange would very soon be announcing the new fall tree planting initiative. And I thought the announcement would mention other (besides wildlife habitat) benefits of trees, including storm water retention. And soil stabilization.

I thought drawing attention to the destroyed hillside would nicely complement the (then) upcoming shade tree announcement. I recollect the announcement was made a day or so after my post. That news article photo was quite striking. In the pre-drone era, I don’t think it would have been taken.

And I wanted to know what ( if anything) those who conceived, planned, authorized and carried out the clear-cutting plan knew about the potential for disaster. I was hoping someone here, on MOL, would know what they knew. Back when it was done. Aren’t you curious about this? I am.

And is there any plan for remediation - does anyone here know?

I saw this after my original post - it’s from a nj.com article first week November:

They’re not the project’s only critics. David Marconi, who lives with his wife and two children in a house on Northfield Avenue, said more than just runoff has been cascading down the slope since the complex was built.

“We have been living under a barrage of lacrosse balls, rocks, trees, water for years,” Marconi, 47, said in an email. “We feel like the town has abandoned us long ago to the desires of Prep.” 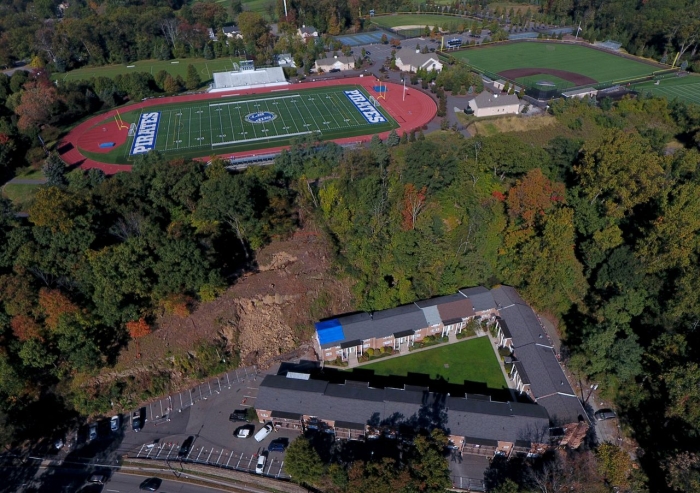 Dickf3, thanks for following up on this. I am not a subscriber to NJ.com and from whatever information I read I had not realized where this happened. Like you, I regretted the loss of trees and a natural area. The level of community education and outrage over this action needs to be ramped up. Are you aware of legal actions against Seton Hall Prep or W. Orange government's response?

I’m not a subscriber either, krnl. The photo was from a “subscribers only” article, but anyone could view the photo and first line or 2 of the article. They’ve had other follow-up stories that anyone can read. I did see that an attorney for apartment residents sent a preliminary notice to representatives of the town, school and apartment owner. Online stories from other sources have appeared in past years, and this year, including from WO Patch, TAPinto WO, and a news division of an NJ radio station. 101.5FM, I believe.

One interesting thing I saw from one of these sources was a link to the plans for the big construction. It appeared in a story before the big clearcutting was approved, I think. The plans showed the track surrounding the big field with hash marks as “pre-existing”. Was there a smaller felling of trees (and construction) after the Kelly’s bought it,  years before the big clearcutting? If so, I didn’t realize that.

I also saw mention of a SHP pledge to plant 900 plus trees at the site to make up for the 1000 or so trees cut down. Looking at the photo from Oct. 2021, I can’t imagine where those new trees were placed.

And I saw the report that a member of WO’s environmental group, during the hearings ten plus years ago,  handed (gave) then-Headmaster Kelly an “inscribed” copy of Dr. Seuss’ The Lorax. I wonder where that copy is now.

I regret not having kept a list of the articles I found online a few months ago. There was one quote (from before WO’s approval)  ascribed to Monsignor Kelly that I found noteworthy, but I can’t be certain of the precise wording, and I can’t find that article right now.

“We want nothing more than what the local public schools would have,” Kelly said. “But we are very concerned about the ecology, and we’re doing everything that we can to stay within local and state guidelines.”