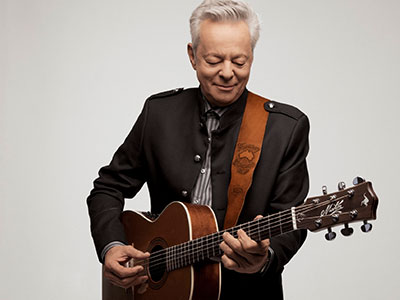 Tommy Emmanuel, four-time winner of Australia’s Best Guitarist Award, has helped bring the art of Rock guitar down under to a higher awareness by bringing a sense of Jazz improvisation into a mix that also includes Blues, Country, Rock, Classical, and Spanish music. After years as a popular sideman and ace songwriter, he carved out his own style as a solo artist, releasing award-winning albums and singles.

He is often regarded as one of the greatest acoustic guitarists of all time. He has shown a mastery and affinity for both electric and acoustic axes, and has been singled out by the likes of notable musicians such as Chet Atkins and Todd Rundgren, who called him an innovator on the instrument. The title CGP, or Certified Guitar Player, was bestowed on Tommy Emmanuel by Chet Atkins and is held by only 3 other guitarists in the world – John Knowles, Jerry Reed and Steve Warriner.